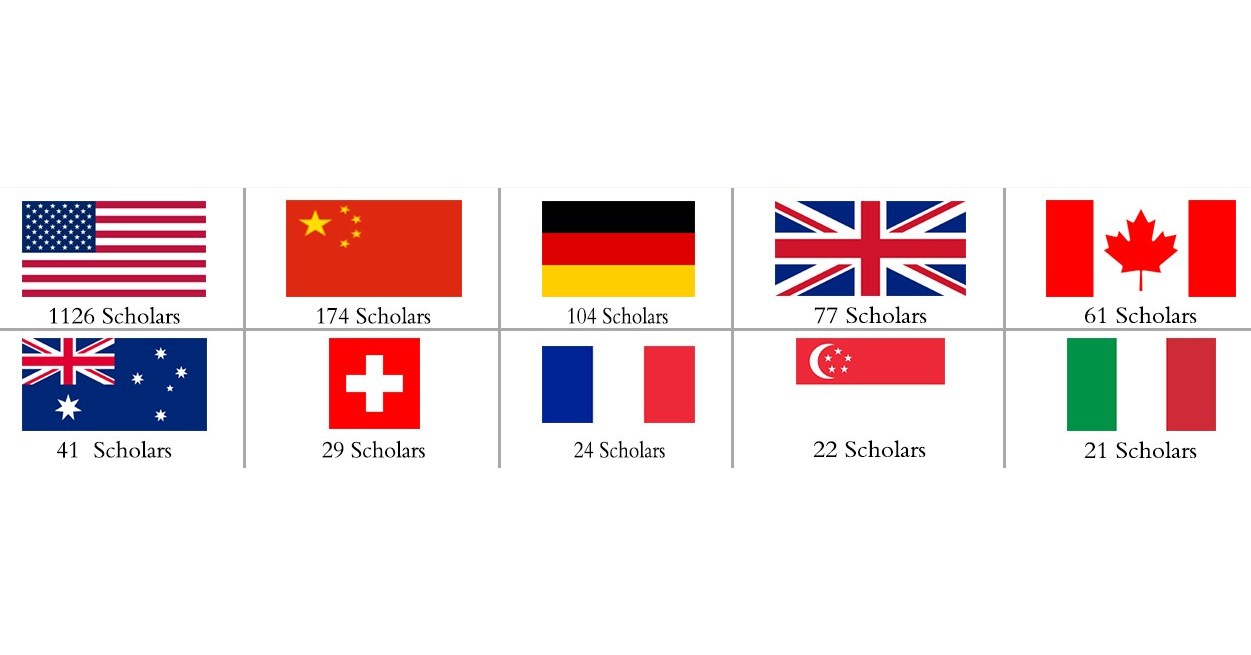 Some researchers have made exceptional contributions in several fields, such as Yoshua Benjio, winner of the Turning Award in 2018; and Alex smola, Amazon’s AWS Machine Learning Director. Both were among the top ten most influential academics in four distinct fields.

Yang Qiang, professor at Hong Kong University of Science and Technology, is named the world’s most influential AAAI / IJCAI researcher. At the same time, Facebook AI Research’s He Kaiming tops the list for “computer field of view.”

AI 2000 fellows come from more than 30 countries, including 1,126 from United States, accounting for 61.4 percent of the total names, followed by China, with 174 academics on the list, representing 9.4 percent. Germany ranks # 3 with the most scholars in Europe. The number of academics in other countries is less than 100.

Cooperation between China and United States is prevalent in the field of AI. A total of 1059 articles were written between the United States and China, representing 28.93% of the total collaborative publications. The majority of cooperation is with American academics reflecting the country’s leading position in this field.

One hundred and sixty-two scientists from Google are on IA 2000, 81 from Microsoft and 48 from MIT. Among Chinese organizations, Tsinghua University made the most contributions, with 24 academics on the list.

Of all 2,000 researchers, 179 are women, which is nine percent. The researchers are from 21 countries, with 116 (over 60%) from the United States. Google and Microsoft have ten named researchers, and MIT has nine.

Top female students at Google are 6.2%, which is lower than the global average of 9.8% and Microsoft, which is 12.3%. On the other hand, the contributors of MIT and the Washington University are almost double the international benchmark.

The proportion of women among Tsinghua’s top academics was 12.5%, higher than from Stanford 10.5%, UC Berkeley and Carnegie Mellon’s 7%. From the point of view of academic fields, the proportion of female academics among the top academics in machine learning is the lowest. Academic output of male and female academics gradually increased with age, reaching its peak in the 46-50 age group. Male researchers between the ages of 26 and 50 publish more papers than women of the same age group.

About AMinerAMiner is an academic database and research system developed by Tsinghua University, which indexes more than 270 million publications from 133 million researchers since the 19th century. Operated since 2006, the system has now been visited by more than 10 million independent IP accesses from more than 220 countries and regions.

About the AI â€‹â€‹2000 listThe 2000 annual list of the most influential researchers of AI nominates the world’s top 2,000 researchers in the fields of artificial intelligence over the next ten years (2020-2029) in recognition of outstanding technical achievements with a contribution and lasting impact. The list is automatically generated and determined by computer algorithms deployed in the AMiner system that track and rank scholars based on the number of citations collected by major publications.

The annual lists published by AMiner are widely recognized for their influence, credibility and professionalism with world-renowned universities and institutions, including the University of California, Berkeley, Cornell University, duke university, national university of singapore

Zoom in: Thousands of calls found via web search, using the default file naming scheme after users save them in unprotected spaces like open AWS S3 buckets

Support system: Young women find support in others during the cancer diagnosis. |…

Upcoming review for the US Medicare system